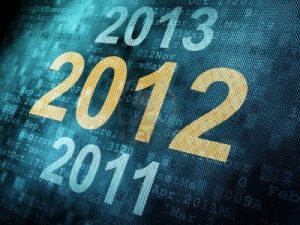 The world enters in 2013 celebrating, cheering and hoping for a better life in this New Year. Everyone is ready to make this year better than the last one.  It’s the same practice we do every year, plan a better year ahead of us for our personal and professional lives, set goals, make resolutions and work every day to make it happen.  Since the year is gone, the party is over – it’s the right time to sit back, relax and review your last year.
Highlights
The year 2012 was full of surprises and shocks for the world, a lot happened in past 365 days that left people dazzled –  like the man jumping from outer space, PSY’s Gangnam Style videos going viral and setting world record, one pound fish street song winning hearts of millions, Sandy setting New York in dark for almost a week and the most viral and threatening news about the world ending in December 2012 proving to be incorrect.
Technology Trends
Information technology industry also found new bench marks last year, companies drove their customers crazy by producing innovative products and services.  The industry leaders took the technology on a higher level, patent war became more serious and many new products came into the market.  Mobiles remain the central battleground in consumer technology. Android got more share in the market pie beating iOS however Apple released new products to gain its pride back.  On the other hand other players in the race such as  Blackberry and Nokia struggled hard for their breakthrough which is still in progress.
Smartphones got smarter
Last year Google Android was a hit mainly because of Samsung Galaxy S3 and Note II – both products won the hearts of people that pushed Android higher on the graph.  Apple released iPhone 5 and iPad Mini which were called the best designs the company has every produced.  Microsoft launched Windows 8 late in 2012 which was highly speculated in news before the release because of it’s new layout, however it hasn’t appeared to be a big hit so far but the company is eagerly marketing it with Intel’s new products.
Buzzing Social networks
Among social networks Facebook still is ahead of all, with new improvements in layouts, privacy settings and marketing services.  Making it interestingly tough for marketers to use Facebook as a marketing medium, the company started emphasizing on paid advertisement (Facebook is now a Public Ltd). Twitter gained popularity among different regions as a micro-blogging platform also updated its layout and introduced more features and integration services. Linkedin which is considered as the best professional social network also worked on its appearance and made big changes throughout the website. Instagram appeared to be the best photo sharing mobile social network, people shared everything from their daily meals to beautiful landscapes.
What’s coming?
Many predictions for 2013 have already been made where people have talked about need of the diversity in Apple’s products, decline in popularity of Facebook, success of Windows 8 and much more.  How do you see the new year changing things around you?