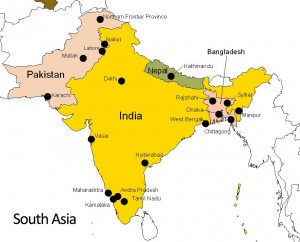 working age groups and out of which 66% are actually employed. Another noticeable fact is that the employment growth rate is lower than both gross domestic product (GDP) and the labor force growth rate. One third of the population is living in poverty and about half of the population in the four bigger countries is illiterate.Map of South Asia
As of May, 2009, the region of South Asia is home to 1,548,952,358 people, which is around about 22.8% of the world’s population, total world population being 6.77 billion (est. May 2009). The whole region is severely suffering from lack of investment and low productivity. According to the World Bank, 70% of the South Asian population and about 75% of South Asia’s poor live in rural areas and most rely on agriculture for their livelihood. Normally, children are working hard to earn their livelihood in spite of going to schools as there are deprived of the basic necessities.
As recession is hitting the world, many of the educated people have become jobless as the job market is not able to maintain equilibrium in demand and supply, resulting in high unemployment ratio. Besides this, women and children are not paid with fair wages and they also face discrimination in the labor market, reflecting prevailing social attitude.
Education plays a major role in any nation’s development. Unfortunately, literacy rate in South Asia is less than 50%, on an average, the highest being that of Sri Lanka, 90%. As people are living in extreme destitution, they hardly have enough money for their bread and butter, so their children remain uneducated and are not in a position to contribute to the nation’s/region’s development. This whole situation results in a stagnant/declining economy, having no sufficient economic growth opportunities.
The developed countries can help the region by making sure that the financial aid provided is invested in profitable projects, creating more job opportunities and should also support in creating full utilization of local resources available. This way, more job opportunities will be created for both skilled and unskilled workers, ultimately reducing the unemployment ratio.
Proper financial, non financial support and guidance from developed countries can help in resolving a lot of problems in the region, which can help these economies stand on their feet. The biggest hurdle normally considered or perceived in this region is corruption, as no one is accountable for the duties and responsibilities that they are assigned. Moreover, people are not assigned duties and responsibilities on merit basis, it’s more a case of references and contacts, owing to which most of the important positions are held by incompetent/average individuals.
The developed nations can play a positive role through outsourcing and off-shoring. The region can be outsourced productive tasks in which they possess core competencies. Besides the financial aid being provided to the region, outsourcing can help them perform the duties and responsibilities according to  international standards. Apart from this, outsourcing to developing countries also proves efficient and cost effective in terms of HR costs and overheads. The other advantage of this activity is that it will provide South Asian countries exposure to the world market, paving the way towards more employment opportunities.
If we utilize those resources in which most of the countries in this region are self sufficient, and invest appropriately with right intentions in lucrative projects, then it is most likely that more people will get jobs and the unemployment ratio in South Asia would improve to a great extent.
Educating the masses will also lead to development of advanced production competencies, as opposed to root level production skills like farming, fishing etc. The quality of output and its resultant revenue generation figures would be enhanced exponentially once the focus is shifted towards industrialization and mass production.
Finally, once key competencies have been established (as it has been done to a great extent in the IT sector, esp. in India, Pakistan and Bangladesh), more work can be outsourced to these regions, resulting in cost effective production which would prove mutually beneficial for all parties involved.