Anyone using Google between 9:30 and 10:30 a.m. EST on Saturday saw an interesting message pop up alongside nearly all their search results: “This site may harm your computer.” Users may indeed know that Web sites sometimes harbor suspicious computer code that can dump spyware or worse on their computers, and that Google will raise a red flag for its customers when it finds such a Web site in search results.
But nearly every search result? 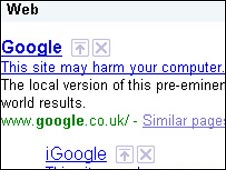 A Tangled Web of Explanations:
The initial effort on the part of Google to explain what happened and provide transparency only clouded the issue further. In her first blog post, Meyer explained that Google tracks Web sites that are known to install malware, and that it received its list of harmful sites from a non-profit organization, StopBadware.org. But a StopBadware Blog posting dated 12:31 p.m. EST said that wasn’t the case: “Google has posted an update on their official blog that erroneously states that Google gets its list of URLs from us. This is not accurate. Google generates its own list of badware URLs, and no data that we generate is supposed to affect the warnings in Google’s search listings. We are attempting to work with Google to clarify their statement.”
Ten minutes later, StopBadware’s Maxim Weinstein said contrary to some media reports, Google did not take down all site warnings, even for those Web sites which did carry malware.
Can Google Be Trusted?
How can that happen to a multi-billion-dollar company?
How can somebody bust the code and then they don’t catch it before it goes live, don’t they test it on a beta server?
The incident throws a big spotlight on Google’s reach and how many people rely on its search capabilities at any given time.
Related Links:
http://blog.stopbadware.org/2009/01/31/google-glitch-causes-confusion
http://googleblog.blogspot.com/2009/01/this-site-may-harm-your-computer-on.html
http://news.bbc.co.uk/2/hi/technology/7862840.stm
http://edition.cnn.com/video/#/video/tech/2009/02/02/alina.cho.google.cnn