Is the iPhone hurting AT&T's brand?

The Apple iPhone has boosted AT&T’s subscriber numbers, but network problems and a bevy of complaints from frustrated customers are likely hurting the company’s reputation.
While a recent survey by the consulting firm CFI Group found that iPhone users are the most loyal smartphone users, with 90 percent saying they’d recommend the device to a friend, half of all iPhone owners surveyed said they would like to jump ship to another provider if given the chance. 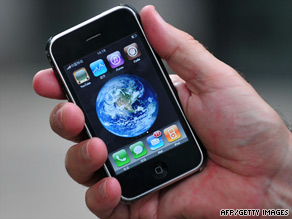 And for the first time, AT&T has scored worse than all four major U.S. wireless operators in terms of overall customer satisfaction for smartphones. According to the survey, AT&T scored 69 out of 100 among users, and 73 among non-iPhone owners. Verizon Wireless was the most satisfying carrier with a score or 79 out of 100 among smartphone users.
Public relations and brand experts warn that if AT&T doesn’t take steps now to correct its image that it could come back to haunt the company in the future. The main issue for customers is that many users, especially those in urban areas, report poor network coverage and service. Problems with AT&T’s 3G wireless have been widely reported on blogs, Twitter feeds, and even in published reports from BusinessWeek and The New York Times.
Customers all over the country have complained about dropped calls and the inability to connect to the 3G network. CNET News writer Elinor Mills documented her frustrating experience with her iPhone in a blog post recently.
AT&T has not admitted any problem with its network. When questioned about potential problems with the AT&T network being overburdened by iPhone users, Mark Siegel, an AT&T spokesman, reiterated the company line: “We have a strong, high-quality mobile broadband network. It is the nation’s fastest 3G network, now in 350 major metropolitan areas.”
Reference:http://edition.cnn.com/2009/TECH/10/02/iphone.att.service/index.html