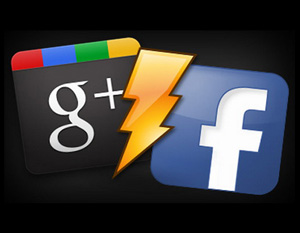 Facebook, currently the king of social networking site has more than 845 million users in 8 years while Google + has about 90 million users in just 8 months. The incredibly rapid increase in the user stats of Google+ is definitely a threat to Facebook but it’s still debatable that whether Google+ can replace Facebook or not.
Ever since, Google+ launched as a direct competitor of Facebook, it has been a hot topic among people that which one of the two internet giants is a better social network. Facebook started losing its users due to compromising on user privacy and after being banned in different countries around the globe for allowing posts containing religious discrimination content.
Google+ and Facebook are on same platform of social networking but many people claim that Google+ is better than Facebook as it has new innovative features while also integrating all Google’s feature in it and making it a better experience for users. Google+ was a hit because of its Hangout feature which let group of friends to video chat and share Youtube videos in a same window and secondly having edge in terms of SEO (Search Engine Optimization) which shows relevant brand’s post of Google+ at the right corner of Google search when the related keyword is typed.
After the prevailing hype of Google+ features, Facebook introduced Skype Video Integration which showed that Facebook will do anything to remain at top and most preferred social networking site but it can’t be ignored that Facebook has no backup by the world’s largest search engine.
In other perspective, Google+ new feature of SEO is highly effective in promoting brands, blogs or any activity which generates business leaving it as an essential feature for business purpose while Facebook mostly have general users who use Facebook as a medium for connecting with their family friend for chatting, sharing videos, uploading photos, posting songs etc. which leaves no reason for the user to switch from Facebook to Google+ unless something drastic happens to Facebook or Google+ introduces a feature which will be unbeatable by Facebook .
So, it won’t be wrong to say that Google+ and Facebook have different positioning which change their target market resulting in no threats from each other at this point of time, rest the future will show if Google+ could replace Facebook and become the New King of the social networking sites.