Is Ipad really a threat to Microsoft?

“Netbooks aren’t better at anything, they are slow, they have a low quality displays and they run 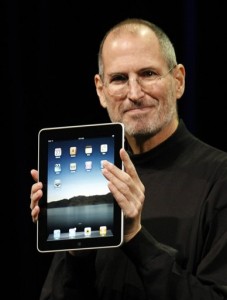 old PC softwares…they are just cheap laptops.” – These were the words of Steve Jobs while he was introducing his so-called ‘magical’ Ipad. Although all of these reasons are practically true but still I can’t see anything ‘magical’ in an Ipad. Does it fly? Can it be used to contact distant planets? (I don’t know if there is really an app to do so) if it can’t do things like these, then I guess it doesn’t fall in the definition of something ‘magical’.

When the Ipad came up in April last year, people had completely different ideas about it. Some liked it; some ‘loved’ it whilst others questioned its longevity in the market. They thought that it is just an idiotic device lacking advance computing features and having an awkward size. But today the growing popularity of Ipad is clearly proving them wrong.

Let’s look at it statistically – According to IDC estimates, the global PC market is about 100 Million units a quarter. And Ipads selling at a pace of 7.3 million in Q4 already holds a 7% share in the overall PC market. If everything goes as expected, in a few years, Ipads will account for almost 25% of the global PC market, especially after the price going down to an anticipated $199. People would have a couple of them just lying around in their houses. Isn’t it amazing?

Well it is not really amazing for other netbook and tablet manufacturers. Perhaps it’s shocking for them to see the Ipad just eating away its customers. A sharp decline in windows-powered netbook sales has already loosened Microsoft’s grip on the global PC market. Ipads or android-powered tablets are substituting desktops, laptops and notebooks. Individuals preferring basic computing features, accessibility and portability are less inclined towards buying a laptop or a netbook.

What are your predictions – is Ipad’s sales and attractiveness going to dethrone Microsoft? How is the software giant going to uphold its status in the overall PC market?