Facebook recently updated and incorporated several changes to its social network. On the surface these changes seem to be more of the UI but when you closely go through the Edit Profile area you will come across some extremely uncomfortable questions that a smart person would never answer.  Facebook is now acting like a curious and annoying child..lol
The new profile now asks you questions like where did you work, on what project and it also allows you to tag the friends you have added on Facebook-on that particular project. Similar questions in the activity area, for example if I have entered ‘clubbing’ as an activity, Facebook would want to know with who along a short description. More information leads to more data therefore more targeted marketing and data selling(which I am sure Facebook does). A lot of people would argue that being a user you can opt out to enter such detailed information and that you cannot 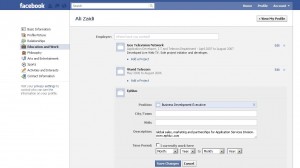 blame Facebook, but for unaware and less knowledgeable users isn’t there a need of public privacy protection and monitoring cell to limit the information hunger of the social networking sites, and protect the users from this invasion.
Another significant aspect of the new Facebook update includes extremely low visibility of the Facebook Applications except those owned by Facebook. Therefore Facebook has shrewdly and strategically first provided high visibility to open Applications and developers and as soon as it reached the planned user and time on site target to be attained from those applications, it has suddenly vanished the visibility of external applications to monopolistically re-gain the complete ownership of data with no sharing. As gradually the external applications will have a drop in number of users, Facebook can raise its advertising and data prices. Also note that during the process of ‘un-applicating’ itself, Facebook gained user support as users started getting annoyed by regular updates and feeds from the applications(which could have been controlled by Facebook).
What are your thoughts on this matter?