Google has been the numero uno website ever since lil johnny learned to count. But its ‘divinity’ over the internet is now in jeopardy as its own popularity quickly diminishes in favor of a simple social network with a  unique approach. 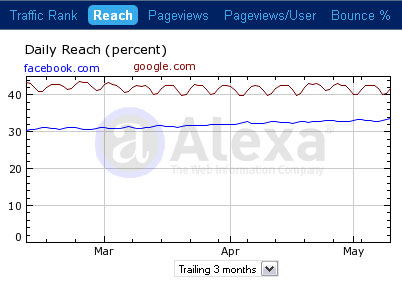 Just like Google ’searches’ for stuff over the internet, facebook kinda encapsulates it into its enclosure. With a  massive stream of apps/mobile devices and whatnot compliance, FB is taking over the internet and media by storm.
Google gets ranked first due to many reasons, one of which is PageRank – but facebook’s like/share options are grabbing links by storm, and every other page you see is off/on/linked to facebook. The result- exponential increase in link popularity, something Google has never had. the more people like/share stuff, the more link popularity facebook gets. All the websites I’ve been using over the past few years now have ‘like/share’ , and various other functions/apps. from FB integrated with them, game portals to news sites alike.
In short, FB’s business model is similar to Google in the sense that it also claims internet territory as its own, n doesn’t let you go anywhere without it, much like Google. However, its encapsulation in representation is far better than that of a conventional search engine.
Its growing popularity was first acknowledged last holiday season, when it officially beat Google for a day at Christmas eve 09(in terms of traffic). March 16 2010 saw FB beating Google for a full week, something that’s never happened before. To add to the injury, its internet messaging systems n chat are going head to head with most messaging solutions(with the exception of Skype, as it offers VOIP – thats coming soon at FB too, or so I’ve heard). Can’t remember the last time i signed on my IM, ICQ yahoo chat, or GTalk.
As of yesterday (12 may 2010) there is a minor difference of 10% between both websites, Google at 43% of internet users and FB at 33%. Three months ago, it was18%, Google at 48% and FB at 30% (source Alexa).
The question – when do you think will FB overtake Google – today, tomorrow, day after, next month, next year, or never? Do you think its a more aggressive business model in terms of Internet conquest than  Google? Or is FB over-rated?
BTW, My pick – statistically, today will be the day FB overtakes Google for good, but next year (13 May 2011).
Comments welcome, with rationale.
Peace,
z
Reference links:
http://www.alexa.com/siteinfo/facebook.com
http://zohaibhisam.com/?p=174