March 14th, Samsung announced their next Galaxy S4 with some cool new features and touchless technology to control the phone with your eyes movement only. Since it’s launch people are giving mix feedback about this new phone also where the experts were discussing if it’s a product good enough to beat iPhone, Apple made a move after two days of this announcement.
The smartphone king Apple launched a webpage enlightening why iPhone is a better product and there’s nothing to fear from their competition. This page tells why iPhone users should be proud and reminds them about the features they are enjoying with it.
“There’s iPhone and then there’s everything else” is the headline of the page, telling why it’s unlike any other phone in the market. Here’re some of them; 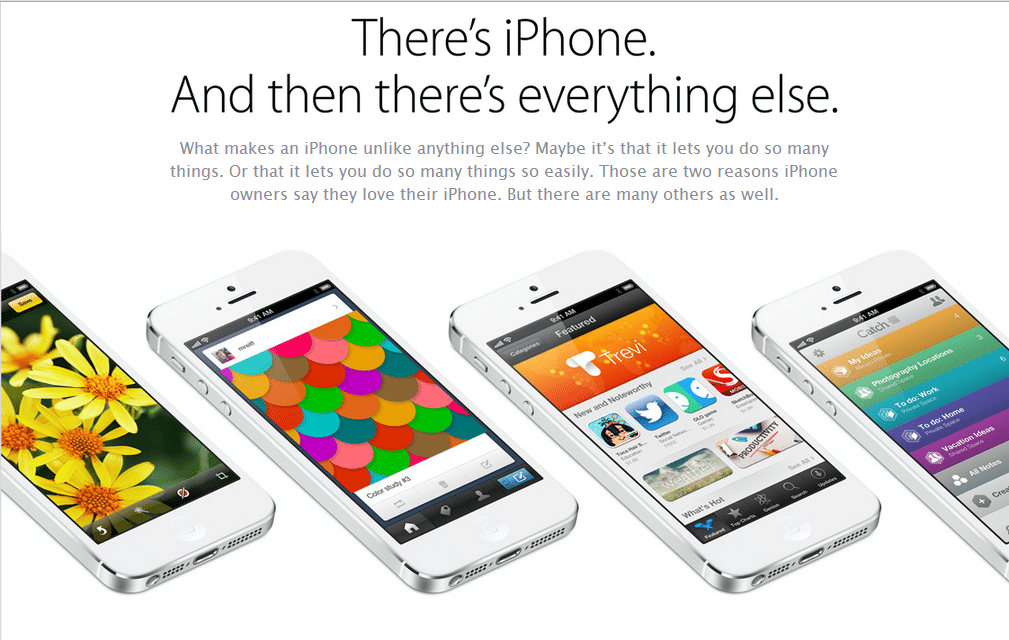 • The iPhone has received eight consecutive J.D. Power and Associates awards for customer satisfaction with consumer smartphones.
• Only the iPhone and other Apple products have Retina display.
• The iPhone has a long battery life — including up to eight hours of talk time — while maintaining a “thin and light design.”
• The iPhone has “ultrafast” wireless and LTE.
• Only the iPhone and other Apple products have access to the iTunes Store and the App Store, which offers over 800,000 apps. What’s more, they are all reviewed by Apple to protect against malware.
• Only the iPhone has Siri, the intelligent personal assistant.
This webpage clearly indicates that Apple is trying to remind its customers that as to why it has been the love mark and why they shouldn’t go to their competition.
Do you think the company is now running scared following after the much awaited launch of Galaxy S4?