Do you really need a new iPhone?

For months, the tech press has been drooling over details of a next-generation Apple iPhone, which likely will be unveiled on Monday at an event in California.
The phone is expected to be fitted with a higher-resolution screen, a front-facing camera that can be used for video conferencing and a camera flash.
But even with those new features, the iPhone is far from the undisputed crown jewel of the smartphone market.
A growing number of competitors are giving the touch-screen, app-driven phone a run for its money. And they’re doing so not only with iPhone-like technical features, but with increasingly robust app stores and a variety of mobile phone contracts.
All of this makes choosing the right consumer-oriented smartphone incredibly confusing.
Before you jump to buy the new iPhone, check out the market to see what works best for you. Here are a few tips for your search: 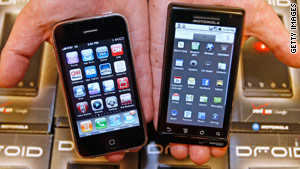 Look at the carrier
Tofel, who covers mobile technology, said it’s smartest for consumers first to look at wireless network carriers — such as AT&T, Verizon, Sprint and T-Mobile in the U.S. — and then choose a phone from within the network.
“Don’t become totally enamored by the phone,” he said. “Make sure you pick your carrier first. If you buy a phone that drops calls all the time … or you’re going with a phone that really doesn’t have great coverage where you live and work, basically you’ve just bought an expensive brick.
“The phone isn’t really anything without the connections.”
Apple’s iPhone is available, for now, only through AT&T, which has the worst customer ratings in many major cities, according to Consumer Reports.
Experts said potential phone buyers should ask friends and neighbors about how their cellular coverage fares near their homes and offices.
Hurry up and wait
Last year, when Apple introduced the iPhone 3GS, the price of the previous iPhone model, the 3G, dropped from $199 to $99.
Combine that with the fact that smartphone prices, in general, are coming down over time, and there’s quite a bit of financial incentive for consumers to wait before purchasing a new phone, said Ross Rubin, executive director of industry analysis at the NPD Group, a research firm.
“Prices for the devices themselves continue to come down on average and given the AT&T announcement yesterday [that it will end unlimited data plans], we’re starting to see a little progress on making the data plans for smartphones and high-end feature phones more affordable, which should also help spur growth,” he said.
Geek out on the OS
You may not use the term “OS” in daily life, but it’s important to know about mobile “operating systems” if you’re in the market for a smartphone.
The two main competitors these days — at least in terms of the touch-screen, consumer-oriented smartphones — are from Apple and Google, which puts out an operating system called Android.
In the same way that Windows manages the way you interact with information on a personal computer, mobile operating systems control the look and feel of a phone.
“It comes down to the experience. If you take away the experience, you just have a multihundred-dollar device filled with plastic, glass and metal,” Llamas said.
Apple is known for its sleek, simple-to-use OS.
“iPhone … has really set the standard for what a smartphone experience is for consumers,” Llamas said. “One of the great things about Apple is that part of its DNA is to make the entire process incredibly simple. Forget the manual; you take it out of the box, and you’ll figure it out in no time.”
Android leads the pack in some ways, however. Apple has said it will allow its phones to run more than one application at once starting this summer. The Android platform has allowed that functionality for some time.
“The software is really the differentiator,” said Tofel.
Is there an app for that?
If you’ve figured out the OS, the next things to think about are apps. Each mobile operating system has its own app store, where you can purchase apps — or “applications” — that will run on the phone.
Think games, social networks, maps and other fun tools.
Apple still has the biggest app store, with more than 200,000 apps. Google’s Android Market is known for being more open than Apple — meaning it doesn’t have to approve apps before they go on sale — but it only has about 50,000 on sale now, according to CNNMoney.
Michael Gikas, senior editor for electronics and technology at Consumer Reports, said Apple’s App Store provides consumers with a bigger reason to get the iPhone than the hardware of the phone itself.
“There’s no better source for all the things people love about smartphones than Apple’s iTunes and App Store,” he said. “They’re the giant.”
‘Screen’ the competition
Screens are becoming a bigger deal to consumers who are looking for new smartphones, the experts said. The standing logic is this: When you use your phone to watch YouTube videos and movies, bigger is better.
So far, Apple has not been the leader in screen technology, according to experts, although there are rumors that Apple may update the iPhone’s screen on Monday. The iPhone screen currently is 3.5 inches, measured diagonally, and that’s not as big as some of its current and upcoming Android competitors.
The HTC Evo, for example, which comes out on Friday, has a 4.3-inch screen.
Reference: http://edition.cnn.com/2010/TECH/mobile/06/04/iphone.competition/index.html
____________________________________________________________________________________________